Afterward Jesus appeared again to his disciples, by the Sea of Tiberias. It happened this way: Simon Peter, Thomas (called Didymus), Nathanael from Cana in Galilee, the sons of Zebedee, and two other disciples were together. “I’m going out to fish,” Simon Peter told them, and they said, “We’ll go with you.” So they went out and got into the boat, but that night they caught nothing.

Early in the morning, Jesus stood on the shore, but the disciples did not realize that it was Jesus. He called out to them, “Friends, haven’t you any fish?” “No,” they answered. He said, “Throw your net on the right side of the boat and you will find some.” When they did, they were unable to haul the net in because of the large number of fish.

Then the disciple whom Jesus loved said to Peter, “It is the Lord!” As soon as Simon Peter heard him say, “It is the Lord,” he wrapped his outer garment around him (for he had taken it off) and jumped into the water. The other disciples followed in the boat, towing the net full of fish, for they were not far from shore, about a hundred yards. When they landed, they saw a fire of burning coals there with fish on it, and some bread.

Jesus said to them, “Bring some of the fish you have just caught.” Simon Peter climbed aboard and dragged the net ashore. It was full of large fish, 153, but even with so many the net was not torn. Jesus said to them, “Come and have breakfast.” (John 21:1–12)

It is a beautiful story. Playful, funny, so human, so hopeful, so unreligious. And it is that particular quality that gives the passage its true character and gives us an essential for knowing Jesus as he really is. The man is not religious. If he were, the story would have taken place in a religious setting—the temple, perhaps, or at least a synagogue—and Jesus would have gathered them for a Bible study or prayer meeting. Jesus doesn’t even show up at the temple after his resurrection. He’s at the beach, catching his boys fishing, filling their empty nets and then having them to breakfast.

The relief comes in like a sea breeze on a muggy summer day suffocating with the smell of mud and dead fish. Because it is an answer to a question we didn’t dare ask—that God himself knows how and when to be playful. With us. It’s like a breath of fresh air. 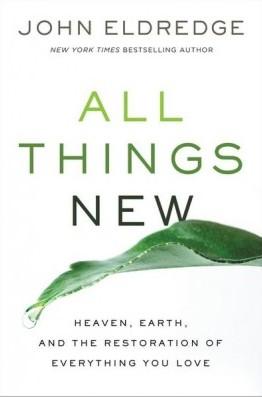