Our mission is simple, but powerful.

Our hope is to change the face of Christianity. Our desires are to...

Recover the treasure of the Gospel

Transform the lives of men and women

Teach men and women to walk with God

While living it ourselves

Equip men to rescue others

Show the way to new wineskins

We agree with A.W. Tozer, "That our idea of God corresponds as nearly as possible to the true being of God is of immense importance to us. Compared with our actual thoughts about Him, our creedal statements are of little consequence. Our real idea of God may lie buried under the rubbish of conventional religious notions and may require an intelligent and vigorous search before it is finally unearthed and exposed for what it is."

In other words, if you want to know what a person (or an organization) really believes, their creeds may not tell you nearly as much as how they live. Or perhaps, how they pray.

The core of what we believe, live in, and teach may be best captured in our daily prayer.

For those needing/desiring a few more thoughts:

We believe the Bible to be the inspired, only, infallible, inerrant, authoritative Word of God.

We believe in the One True God, the Sovereign, eternal Creator of all that exists, both seen and unseen. God is eternally existent in three persons, yet one God: Father, Son, and Holy Spirit.

We believe in the deity of our Lord Jesus Christ, in His virgin birth, in His sinless life, in His miracles, in His vicarious and atoning death through His shed blood, in His bodily resurrection, in His ascension to the right hand of the Father, and in His personal return in power and glory.

We believe God created mankind in His image. Adam and Eve, the first human beings, chose to rebel against God and go their own way. As a result, all of mankind became separated from God; the image of God in man was distorted; mankind became subject to the power of the devil; and the sinful nature was passed on to all their progeny. Because of original sin, unregenerate human beings are incapable of pleasing or commending themselves to God. The only remedy for mankind's pitiful predicament is redemption through faith in Jesus Christ.

We believe that when a person exercises saving faith in Christ he passes, immediately, out of spiritual death into spiritual life and from the old creation into the new, a new nature and a new heart imparted; being justified freely by grace, he is accepted before the Father as Christ, His Son, is accepted and loved as Christ is loved, having his place and portion linked to Christ and one with Christ—forever.

We believe in the present ministry of the Holy Spirit by whose indwelling the Christian is enabled to live a godly life.

We believe in the spiritual unity of believers in our Lord Jesus Christ. 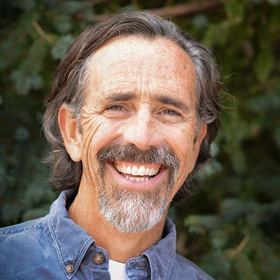 John Eldredge is an author (you probably figured that out), a counselor, and a teacher. He is also president of Wild at Heart, a ministry devoted to helping people discover the heart of God, recover their own hearts in God's love, and learn to live in God's Kingdom. John grew up in the suburbs of Los Angeles (which he hated) and spent his boyhood summers on his grandfather’s cattle ranch in eastern Oregon (which he loved). John met his wife, Stasi, in a high school drama class. But their romance did not begin until they each came to faith in Christ, after high school. John earned his undergraduate degree in Theater at Cal Poly and directed a theater company in Los Angeles for several years before moving to Colorado with Focus on the Family, where he taught at the Focus on the Family Institute.

John earned his master’s degree in Counseling from Colorado Christian University, under the direction of Larry Crabb and Dan Allender. He worked as a counselor in private practice before launching Wild at Heart in 2000. John and Stasi live in Colorado Springs.  They have three sons (Samuel, Blaine, and Luke), two golden retrievers (Oban and Maisie), and two horses (Whistle and Kokolo).

While all of this is factually true, it somehow misses describing an actual person. John loves the outdoors passionately, and all beauty, Shakespeare, bow hunting, a good cigar, anything having to do with adventure, poetry, March Madness, working in the shop, fly fishing, classic rock, the Tetons, fish tacos, George MacDonald, green tea, buffalo steaks, dark chocolate, wild and open places, horses running, and too much more to name. He also uses the expression “far out” way too much. 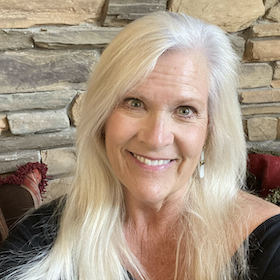 Stasi Eldredge loves writing and speaking to women about the goodness of God. She spent her childhood years in Prairie Village, Kansas, for which she is truly grateful.  Her family moved to southern California back in the really bad smog days when she was ten.  She loved theater and acting and took a partiality to her now-husband, John, when they were friends in high school. Stasi earned her bachelor's degree in Sociology from San Diego State University, which she attended primarily because it was close to the beach.  She became a Christian her junior year in college and dove into the ministry of Campus Crusade for Christ.  After graduating, Stasi joined Youth for Christ, heading up a ministry to pregnant teenagers and teen mothers.  She has been active in ministry ever since, including theater ministry, crisis pregnancy center ministry, women’s ministry, and children’s ministry. The Eldredge family moved to Colorado in 1991.

Stasi loves the joy and freedom that comes from knowing the passionate, stunning love of Jesus Christ and lives to see others come to know him more deeply.  She loves worship music, time to bake, celebrating life, getting lost in a good novel, baths, walking in the woods, hearing her sons' laughter, the sound of wind in the trees, a good cup of coffee, the smell of the earth after it rains, a powerful turn of phrase, animals in the wild, gardens, freshly mowed grass, family traditions, cherished friendships, the Tetons, rivers, mountain lakes, the grace and beauty of horses, the affection of her dog, and most of all, her family and her God.

Brad is the Executive Director and a board member for Wild at Heart, where he oversees most of the administrative, HR, and operations for the ministry. Brad’s varied background includes being a physician who worked for NASA, mission work with YWAM, and working with Focus on the Family as a medical advisor. Brad has been bringing his organizational, leadership, and cat-herding skills to these various roles over the 12 years he has been at Wild at Heart.

Bart Hansen is a founding board member of Wild at Heart. Shortly after the ministry began, he was invited to join the team as Director of Discipleship and a vice president on the leadership team. He also has a speaking role in the men’s events. Before he made a career transition to ministry, Bart was a principal and co-owner of Shawntana Development Corporation and Nieupointe Enterprises, which have developed housing and commercial properties in southern California for over 25 years. Bart was involved in bringing affordable housing solutions to that region of the country in both for-profit and non-profit sectors. He was a founding board member of HomeAid, which provides housing for the homeless and has grown to a national presence; he's also the chairman of the board of directors of the Orange County Rescue Mission in California.

One thing that deeply stirs Bart’s heart is the continued pursuit of his bride. They met running in Texas 40 years ago, and Bart has been chasing Tannah ever since! Bart and Tannah have one son, Kris, who is married to Margarett; Kris and Margarett have two sons. Kris is a Marine aviator who picked up his love for flying from Bart at the age of 12 and is now passing that passion along to Bart and Tannah’s grandsons.

Many of Bart’s adventures have centered on his love for flying, something he incorporates in discipling men in his role at Wild at Heart. He has set aside many of his other interests but still loves golf, bird hunting, and shooting sporting clays. Bart also loves building all kinds of things—a house, workshop, aircraft hangar, or the airplane in it. But the building that turns his crank the most is building the Kingdom into the hearts of people.

Morgan Snyder has served alongside John Eldredge since before the inception of Wild at Heart almost two decades ago. Originally developing and directing the retreats and conferences, Morgan now serves as a speaker, teacher, and Director of Strategy.

He is married to an extraordinary woman, Cherie, and finds great joy in adventuring with his 15-year-old son, Joshua, and his 12-year-old daughter, Abigail. When he’s not with his family or on mission, he is most often found on expeditions in the mountains of Colorado.

To reach the board members, please email board@ransomedheart.com.